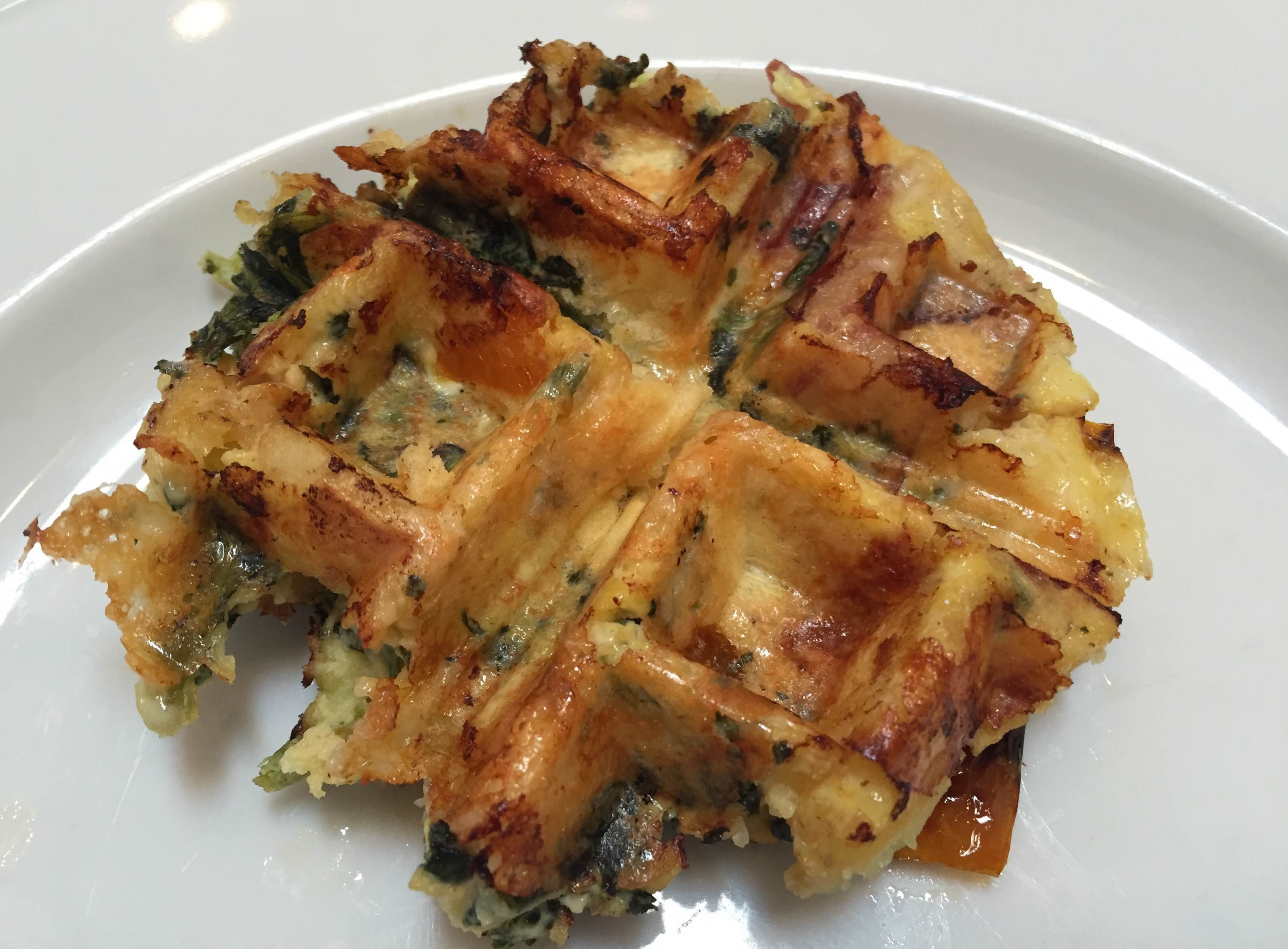 My first attempt at Frittaffles left me frustrated with a crumbling pile of half scorched frittata littering the waffle iron. You can see what went wrong here: Bacon Spinach Goat Cheese Frittaffles. There is no way I was going to let the frittaffles win. So I’m back with a successful second attempt. Using an oven-safe non-stick pan for the frittata made all the difference. I think that was the crucial step that kept things on track. Again, follow the instructions in the original recipe exactly, and it should work: Frittaffles.  In this attempt, I used New Jersey White sweet potatoes, substituted frozen chopped kale (cooked) instead of arugula, and hard shredded goat cheese instead of the cow’s milk cheeses in the recipe. This all still worked.

New Jersey White sweet potatoes seem to have a tiny bit less moisture content, so get less soggy than regular sweet potatoes. I think this may have helped the frittaffles hold together this time around. The original recipe uses regular white potatoes. 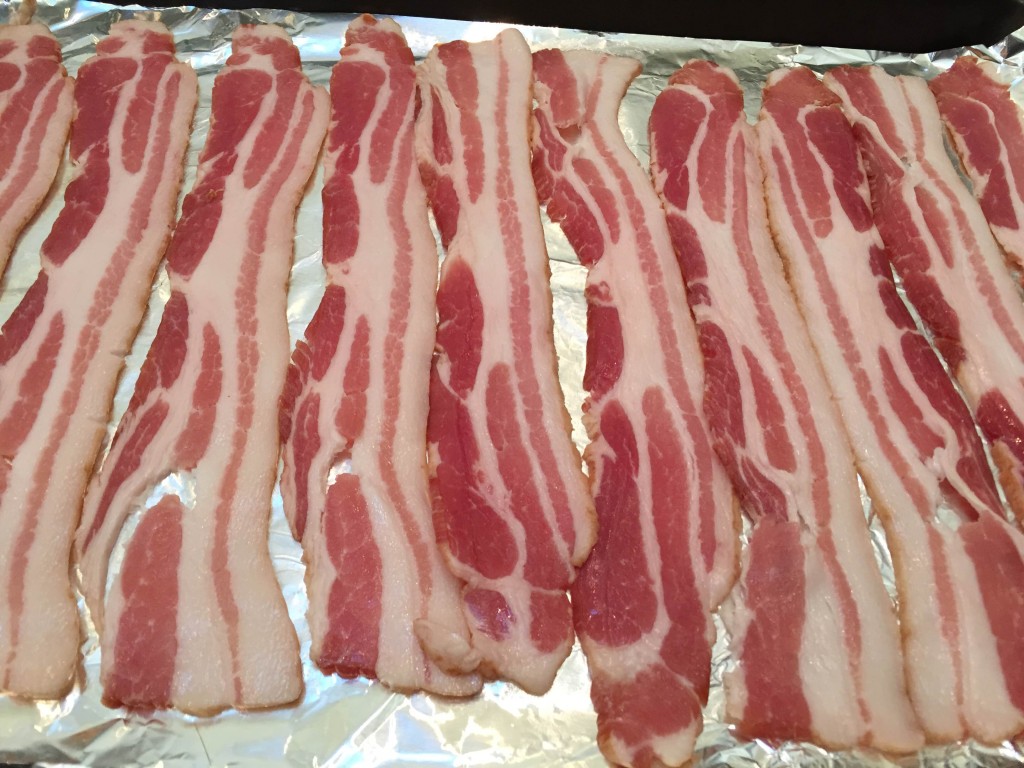 Cooked some bacon in the oven to go into this recipe. This is now my go-to approach for bacon. See more about this here: Bacon in the Oven. 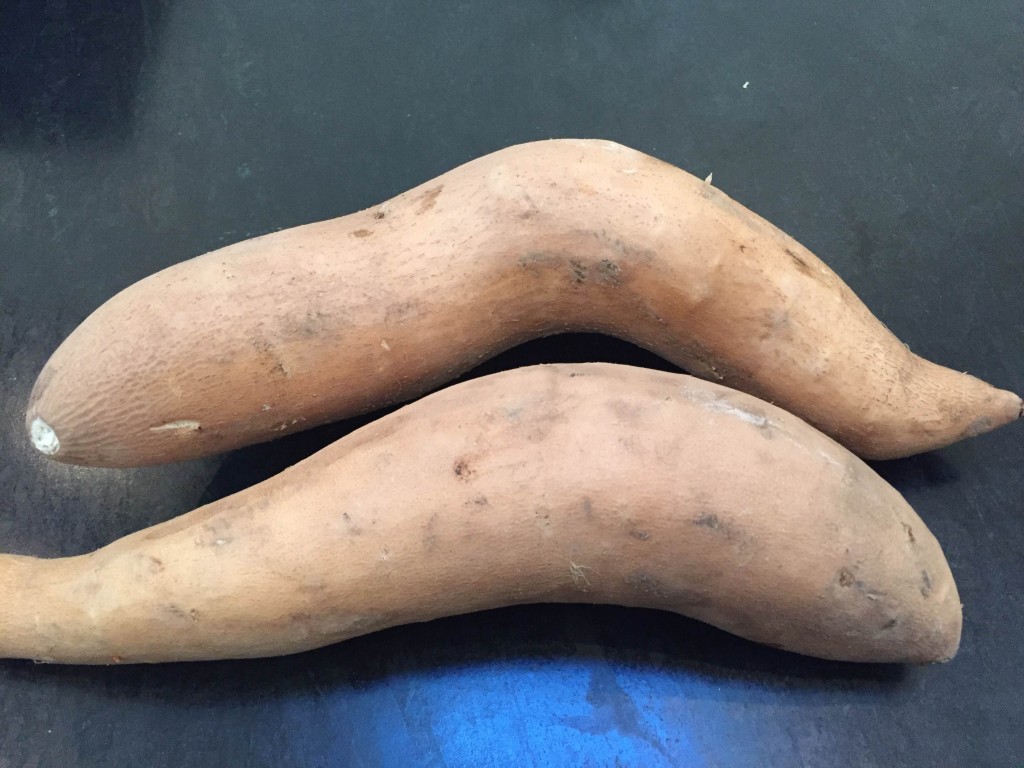 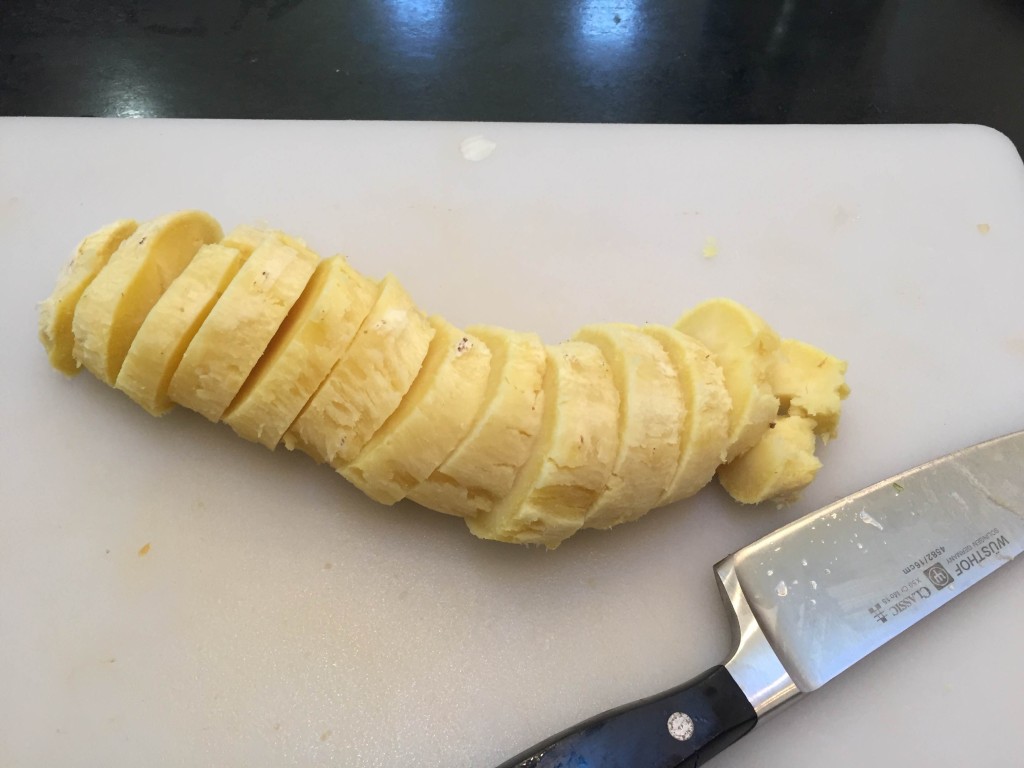 This time I used a yellow pepper and some onion rather than red pepper and shallot. Turned out great. 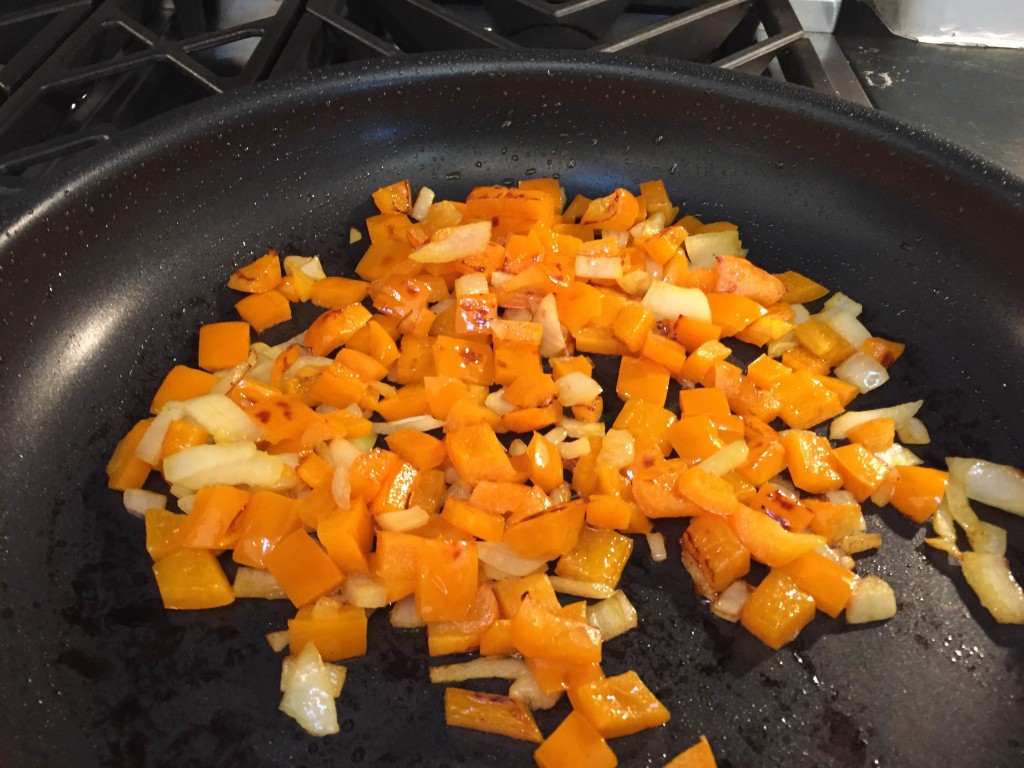 Here are some of the frittata ingredients before eggs and cheese are added. 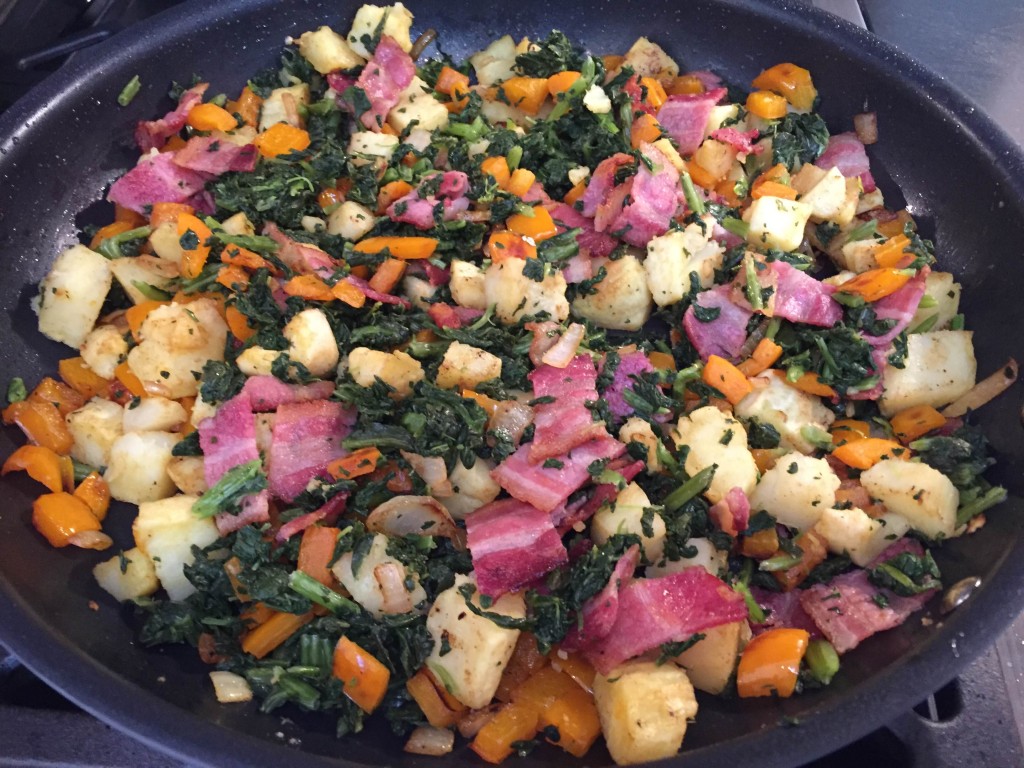 This is the frittata about to go into the oven. This is a delicious mix of flavors and would be wonderful as just a frittata, without the waffling process, for breakfast or brunch. Or even dinner.

Here’s how a frittata is supposed to slide out of the pan. This didn’t happen last time. Oven-safe non-stick pan for the win this time around. 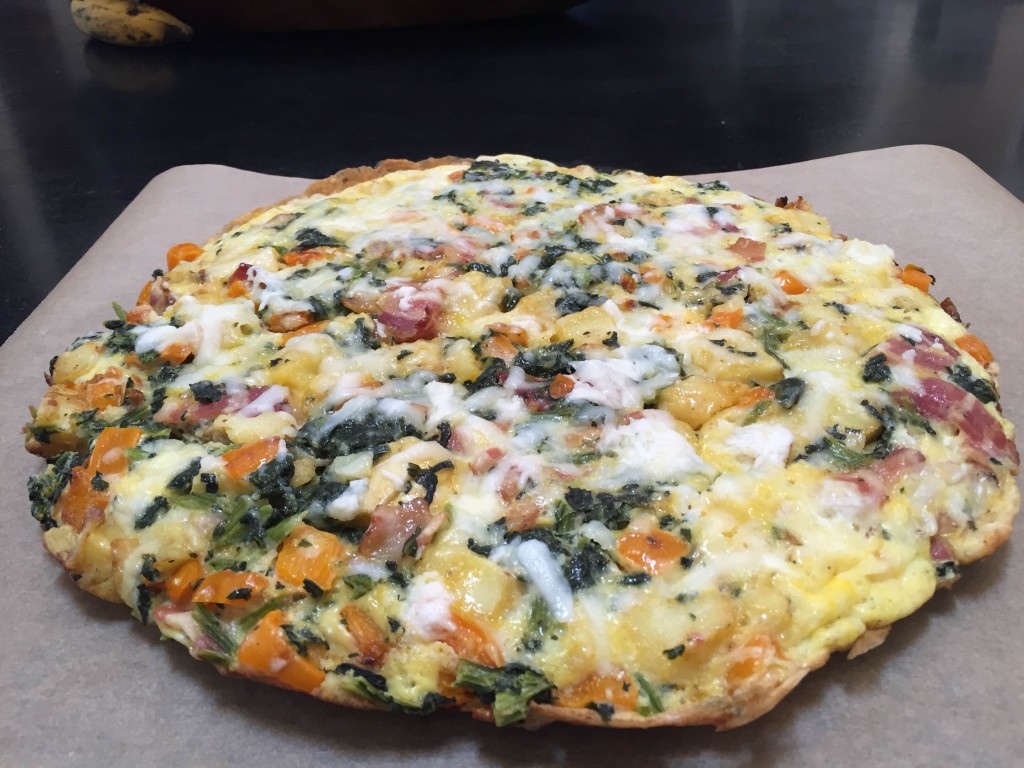 Let’s just save ourselves the time and eat it like this. Seriously, though, the main sell for making the frittaffles is the portability. Nice for kids, less unwieldy than trying to carry around a slice of frittata. 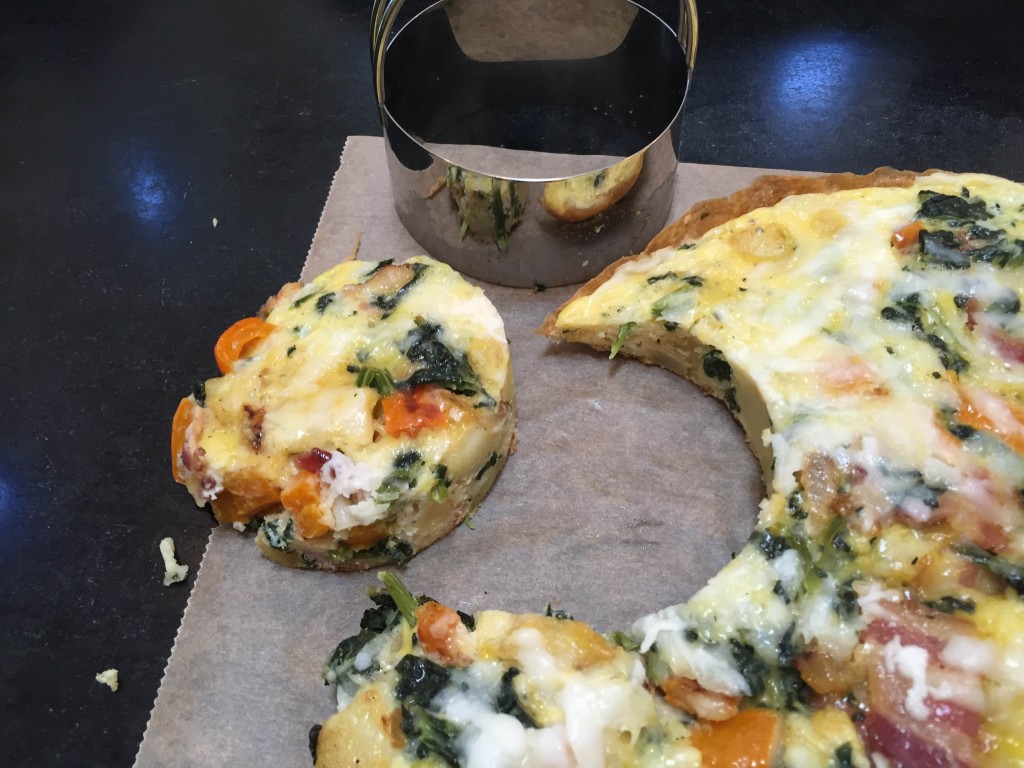 After two hours in the fridge for the frittata, time to cut rounds to go into the waffle maker. 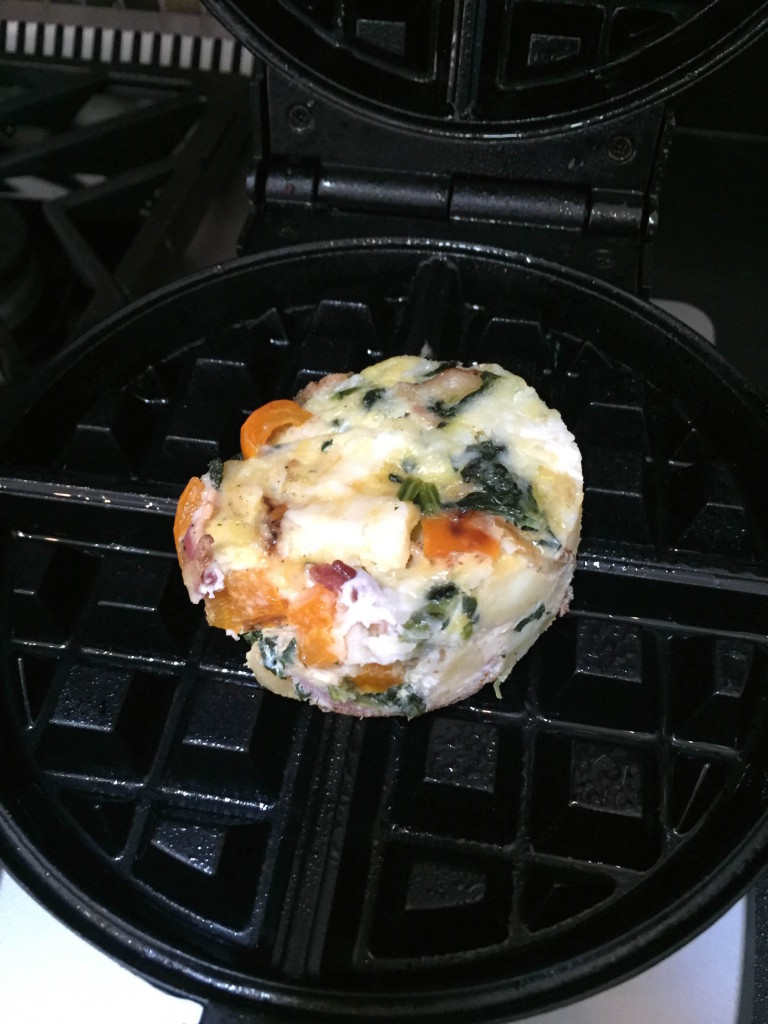 Three minutes seemed to be the magic number for these to come out without sticking (happens if you take them out too early) or scorched (too long in the iron). Had to be extra careful taking them out of the waffle iron to ensure they held together. I think the cheese sprinkled on top of the frittata could be a culprit in the sticking problem. 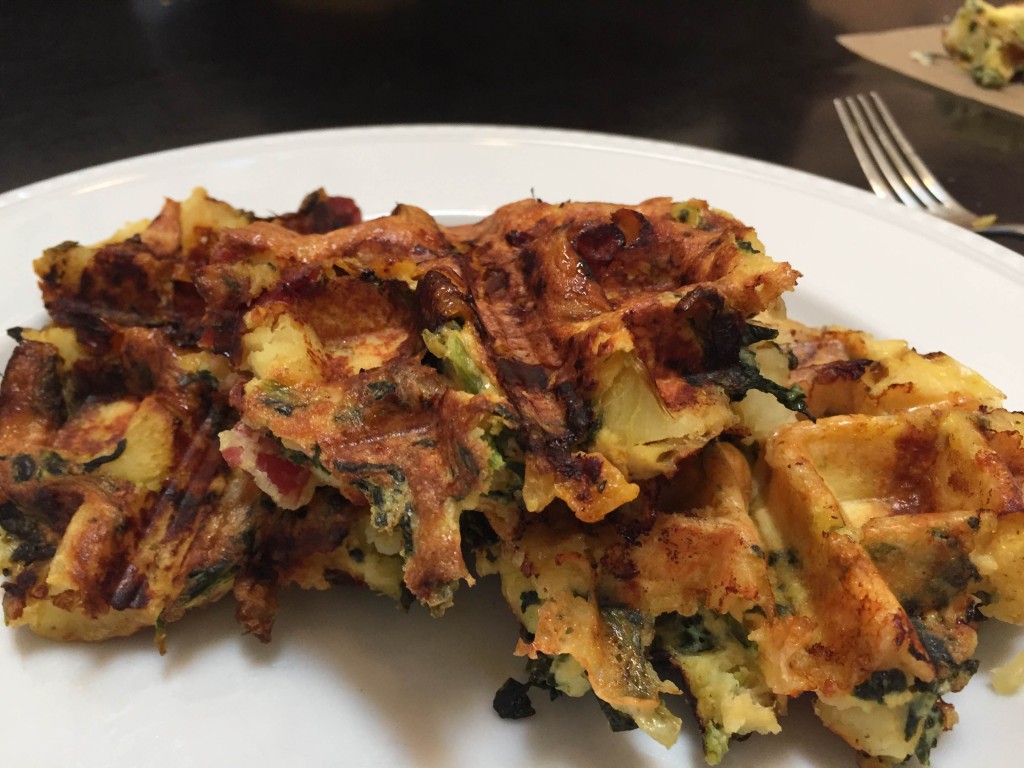 And at last, the finished product.